Everything I Wanted to Know about Santa I Learned in Florida 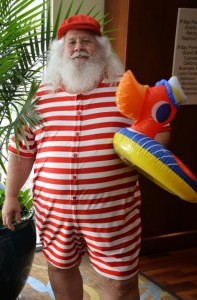 Santa finally gets to model his swimwear. Photo by James Williams.

One of the great joys of living in the fringe state of Florida is that the same attractions that bring 94 million flip flop-wearing tourists to our roadways every year also draw conventions of about every conceivable subculture to our backyard.

For three days, about 275 rotund, white-bearded St. Nick’s along with a posse of Mrs. Clauses and elves waddled around the DoubleTree by Hilton Tampa Bay sharing trade secrets and the latest in Santa gear.

Luring Santas from around the nation to sunny Florida wasn’t a tough sell for the host Florida chapter, the Palm Tree Santas. Many kicked off the annual rendezvous with a group excursion to Busch Gardens theme park or a swim with Mermaids. Hey, it’s Florida; fantasy worlds collide.

For the public and press, they held a sleigh show and an autograph session with celebrity Santa and retired World Wrestling Federation star Mike Foley.

This particular afternoon is more sedate. More than a dozen Santas sit around the hotel lobby conversing, reading their Ipads, or in the case of one, taking a nap. Although they aren’t wearing red furry Santa suits, there’s no accidently mistaking them for Jerry Garcia. They dress campy Santa casual – green shorts, red shorts, red and white-striped shirts, sleigh-riding Santa Hawaiian shirts, red and white polka dot socks, and on and on. One particularly round Santa in an old-fashioned, red and white-striped bathing suit wanders around holding an inflated parrot swim ring as if searching for the pool.

Many Santas are in seminars learning how to whiten their eyebrows or tell a good a story, while others vend fake Santa IDs and essentials on the tradeshow floor. A relaxed bunch, they are more than happy to share their love of all things Santa.

Burly Jim Chason, with a part down the middle of his curly white locks, sells raffle tickets for a free course at the International University of Santa Claus in California. “There’s a lot to being a Santa that people don’t realize,” the Santa from High Springs, Fla. says as he pulls out his master’s degree certificate. “I have this and my bachelor’s degree.” A Kriss Kringle clamors at the table for details. 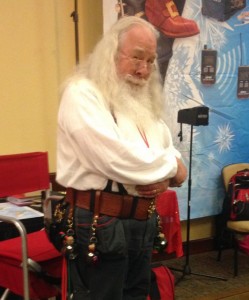 Santa Steve, the most cunning of Santas. Photo by Lynn Waddell

At another booth, Santa Steve Gillham from Chapel Hill, N.C. shows off his inventions. His fluffy white beard and mustache sparkle with glitter. Although he’s not lean, by comparison to other Santas, he’s an Olympian. Red, yellow, blue and green glass balls encased in leather are clipped to the side of his belt like Santa hand grenades.

“How do you think I get down the chimney?” he says, his blue eyes twinkling over the rims of his wire-framed glasses.

He breaks from character to explain.”Children are real smart and they’ve seen all the movies. They know there are a lot of fake Santas out there, but they are always hoping that they meet the real one. So, I never go out without an earbud.”

Turns out, he employs a little Santa subterfuge to keep the Father Christmas dream alive. His wife, dressed not as Mrs. Claus even though she sometimes plays that role, works the kids at his appearances. She finds out names, ages and then the clincher — their favorite present from the previous Christmas. She relays all this to Santa’s Steve’s ear piece. “When I ask them how they liked the red bicycle I left them the year before, they think, ‘I have found the real Santa!'”

Santa Steve also doesn’t skimp on his costume. The oversized leather boots with swollen toes and belt like he’s wearing are on special at the adjoining table for $875. The most basic Santa suit without embroidery runs $995 on sale. Santa Steve has clearly surpassed entry level Santa accoutrements.

“When I go out I’m wearing about $4,500,” Santa Steve says. Not surprisingly, you won’t find Santa Steve working shopping malls. “No, I’m a premier Santa,” he says. “I do appearances at special events and homes.” That’s for $175 an hour and an extra $75 an hour for his assistant.

Despite some high paying gigs like the North Pole Experience in Arizona or television work, Santa wages aren’t something that most can live on given that there’s only work about two months out of the year. “Nobody does it for the money,” says Santa Steve, who’s also a Remax Realtor. “Nobody wakes up one day and says I wanna be a Santa.”

Rather like many Santas I and other reporters speak with, Santa Steve “got the calling.” Ten years ago his wife, a pediatric nurse, urged him to fill in after regular hospital Santa dropped dead. (“There’s a high death rate in the world of Santas because most are so fat,” he adds.)

After seeing the children’s faces light up on his first Santa appearance, Steve let his short grey hair and beard grow long. He’s donned the red suit every Christmas since then. “If you put on the red suit, it’s a rare man who cannot continue to do it.”

« The Pitfalls of Living with a Lion – Fringe Florida » Easter in FLA: Fabio Jesus and Furries