For the Love of Feet 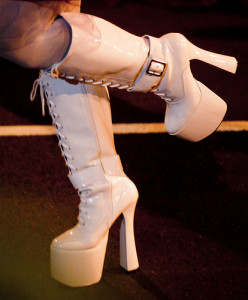 Today’s Broward/Palm Beach New-Times‘ piece about South Florida women selling their dirty socks to foot fetishists on Craigslist caused me to flashback to an underground fetish party in Fort Lauderdale. Stationed in the ladies restroom, the otherwise ordinary-looking middle-age man begged passing women to let him lick their feet. Without hesitation a young woman pulled off a knee-high, patent leather boot and let him suckle her sweaty toes while she talked to her girlfriend about eye liner.

At the time it didn’t surprise me. Possibly because I had just watched a fetish performer pull a string of beads from her vagina and toss them into a crowd all too eager to catch them. Although after a few months of exploring the kinkiest of sexual fetishes for my book Fringe Florida, even that didn’t shock me. A certain numbness sets in.

Perhaps it’s only appropriate that the penis-shaped state is home to a massive kinkster community — practitioners, performers, models, filmmakers, and actors.  The Fetish Factory superstore in Fort Lauderdale is a key player in the international glam fetish scene. Their Alter Ego event spin-off  has hosted an annual fetish weekend for 18 years and owners claim to have held monthly, strict-fetish-dress-code parties longer than anyone else in North America. Their Alter Ego online community is a Facebook of kink. On the sign-up you’ll find a drop-down menu of sexual proclivities as long as your foot, including turn-ons by Saran Wrap and toilet training.  You must choose one when registering. As a Vanilla, I opted for the shoe fetish (what woman doesn’t love footware?) and voyeurism since journalists are observers of the human condition, albeit not necessarily sexual.

Soon after signing up a handsome semi-pro baseball player in Southwest Florida messaged me. He was into gaining and feederism, fetishes for watching yourself and others become engorged. That online encounter is a story for another day.

As for dirty socks being sold on Craig’list, well, as the New Times also notes, people have been peddling such things on Ebay for years. Most likely on Craigslist, too. Podophila is one of the milder and more common among the broad spectrum of kink.  Orlando, family vacation kingdom, even has foot fetish parties.  As a super heroine wrestler told me at one Fetish Con in Tampa, there’s a sexual fetish for everything, even something as ordinary as a puffy coat. For obvious reasons, that one isn’t particularly popular in Florida.