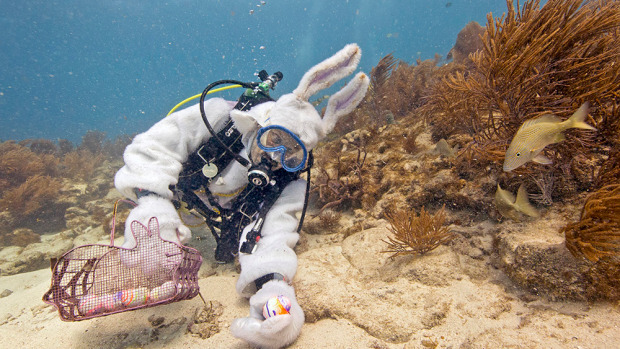 Like most events in Florida, Easter celebrations often take a surreal twist. Hordes of Christians crowd the Holy Land Experience theme park in Orlando to watch a Disneyfied reenactment of Jesus’ resurrection. The Jesus actor who looks a lot like Fabio is mounted to a cross while Mary and his posse dance and sing to a recorded orchestra. The faux resurrection is performed daily, but Easter is the most popular performance for obvious reasons. Get the details in the book Fringe Florida. 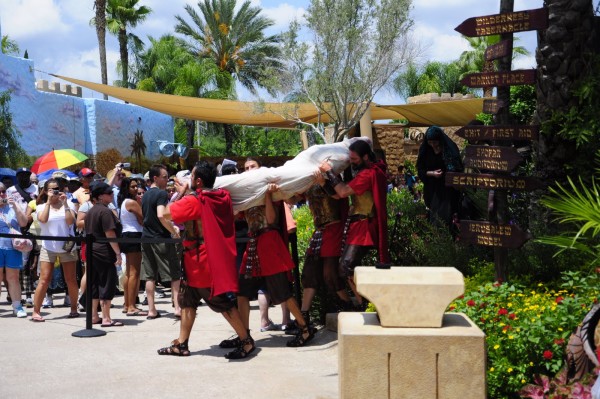 The crowd seizes the photo op as Jesus’ body is carried away by the Roman soldiers.

Then you have Easter egg hunts, Florida-style. Not that the traditional association of bunnies and brightly colored eggs and the resurrection of Christ isn’t strange in itself. (Supposedly, Easter eggs represent the empty tomb of Jesus and they were originally dyed red to represent the blood of Christ. Pretty gruesome when you think about it, which may be why that isn’t shared with the kiddies.)

Here in the land of furries – that is, people who are into anthropomorphic characters, -Easter egg hunts offer an excuse to dress up like a giant puppy or the Energizer Bunny. One group of Florida fursuiters hopped around hunting eggs at a Palm Bay park.

Of course, not every Floridian who dressed like a bunny this Easter was a “furry.” Every year dive Capt. Spencer Slate dons a bunny suit complete with long bunny ears and hides hard-boiled eggs on the sandy ocean bottom in the Florida Keys. This year, about 60 people – divers and snorkelers – paid $20-$65 to hunt the eggs.

Matt Pehrson, manager of Captain Slate’s Scuba Adventures on Key Largo, says diving in a furry suit isn’t as difficult as it might seem. “Once you’re in the water it doesn’t weigh you down,” Pehrson said. “It’s not like a full-on mascot suit. The worst thing is keeping the ears straight.”

« Everything I Wanted to Know about Santa I Learned in Florida » Joe Redner: Strip Club King and Cigar City Beer Backer