Lynn’s had a diverse writing career. Based in the Tampa Bay area, she’s covered major Florida news stories for national publications such as the Wall Street Journal, the New York Times, Newsweek, Daily Beast.com and NPR.com. She has appeared on MSNBC and the Oxygen Network’s true crime series “Snapped,” and been a guest on radio talk shows throughout the United States.

Her first book Fringe Florida: Travels among Mud Boggers, Furries, Ufologists, Nudists, and Other Lovers of Unconventional Lifestyles is an offbeat tome that takes readers inside some of the state’s most eclectic and daring worlds. It is published by University Press of Florida.

She has written for state and national travel magazines, worked as a field producer for a Paris news crew, and researched for a major motion picture.

Lynn’s love of story began as a child growing up on a cattle farm in north Alabama. She immersed herself in Nancy Drew mysteries and was soon writing short stories. By high school she was writing weekly articles for the local newspaper. She discovered the thrill of investigative reporting at the University of Alabama and graduated with a bachlor’s degree in journalism. She became a staff writer for the Birmingham News where her investigative reports helped send one of the city’s most prominent developers to prison.

At 23, she became the Las Vegas Sun’s first female casino reporter. She chronicled the booming Las Vegas’ casino industry and the national explosion of legalized gambling. Her award-winning series on underage gambling drew widespread attention. Following its publication, the Nevada Gaming Control Board issued its first fine against a casino for allowing minors to gamble.

In addition to her Las Vegas newspaper reporting, Lynn researched for Hollywood screenwriter Joe Eszterhas and was a consultant on the major motion picture “Showgirls.”

She left the desert and neon marquees behind in 1995 after receiving a Poynter Institute Fellowship to the University of South Florida in St. Petersburg, Fla. She earned her master’s degree in mass communications while also teaching as an adjunct professor. A top scholar, she was honored with a St. Petersburg Times scholarship and the GTE Business Journalism Award.

Following graduation, she settled in St. Petersburg and explored longer, free-form writing at an alternative newspaper, the Weekly Planet (now Creative Loafing) in Tampa, Fla. Her articles won state awards and also appeared in Salon.com and other alternative newspapers throughout the United States.

She embarked on a full-time freelance career in 2001 and retraced the steps of 9-11 bombers for Newsweek. Some of the news stories she has since covered include the Virginia Tech University shootings for Newsweek; Florida’s Quran-burning minister and the Republican National Convention, both for the Dailybeast.com; the George Zimmerman trial for the Wall Street Journal; the Terri Schiavo right-to-life case for Newsweek and the New York Times; and Presidential elections in Florida for the Christian Science Monitor, Newsweek, the New York Times, Russian Newsweek and TV5Monde of Paris (as field producer).

When not at her keypad or on an interview, she enjoys the Florida sunshine with her husband and her Golden Retriever dog-daughter, Sandy. 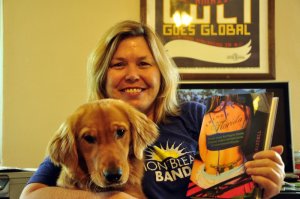