It’s only appropriate that near the release of my book I return to where I began the adventure, Fetish Con. Yes, this is a convention with a trade show floor, conference rooms and all the trappings of bourgeois commerce, except Fetish Con vendors push everything from super hero porn to shock wands. Kinksters attend seminars on age play (think men in diapers) and how to safely beat their partner. The downtown Tampa Hilton (formerly the Hyatt) has hosted the kinky event since 2004, so long that leather-clad fetish models in platforms and a man dressed as a bumble bee standing outside the hotel don’t get second glances from the passing suits on lunch break. It was here in 2009 that I discovered that my state is a beacon in the dark world of sexual fetishes. No state outside of California, of course, matches Florida in kinkiness or business enterprises that supply the goods, be they fetish models, latex clothing, or human pony tack. 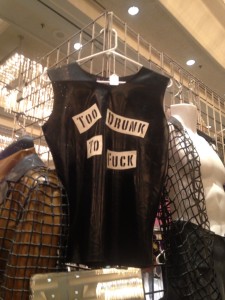 I met my first ponygirl at Fetish Con along with an international pony play champion. They weren’t around during my visit this past weekend, but I did find evidence of the champ’s handiwork. A pony play newbie from Deland was wearing some of his hand-crafted leather tack complete with a real horse-hair tail. 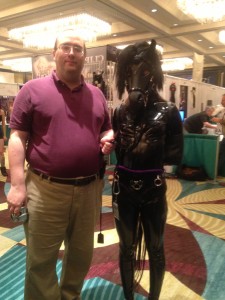 Gene and his new ponygirl at Fet Con 2013. Gene is sometimes a pony, too. Photo by author.

Holding her reins, Gene B., formerly of Florida, said he said he’s a switch, which in pony world means that at times he’s a pony and at other times, a pony trainer. His business card says he’s also into tickling, human pets, and human furniture. Like a good submissive, the vinyl-hoofed pony was quietly under her trainer’s control (pony play is an extension of BDSM). Plus, she had a bit in her mouth which makes pronunciation virtually impossible. When I asked if she liked being a pony, she managed a light whinny. Gene said he’s adding her to his stable of human pony trainees. Never mind that he now lives in Texas. Ponies will travel for the right touch. For that matter, kinksters of all flavors travel to Florida to fulfill the fetish fantasies. This Jersey/Virginia couple has been planning their annual vacation around Fetish Con for 10 years. They say it helps their marriage. 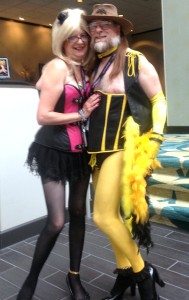 William and Karen keeping it unreal at Fetish Con 2013. Photo by author. 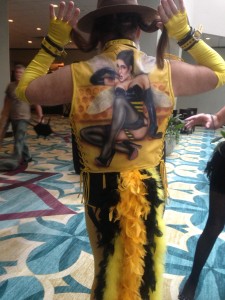 Fetish Con 2013: Not clear if Williams sees himself as the bee on his back or if it’s more like a Wanted poster. 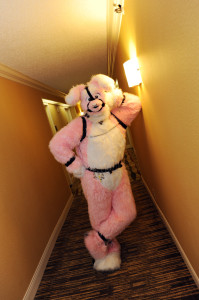